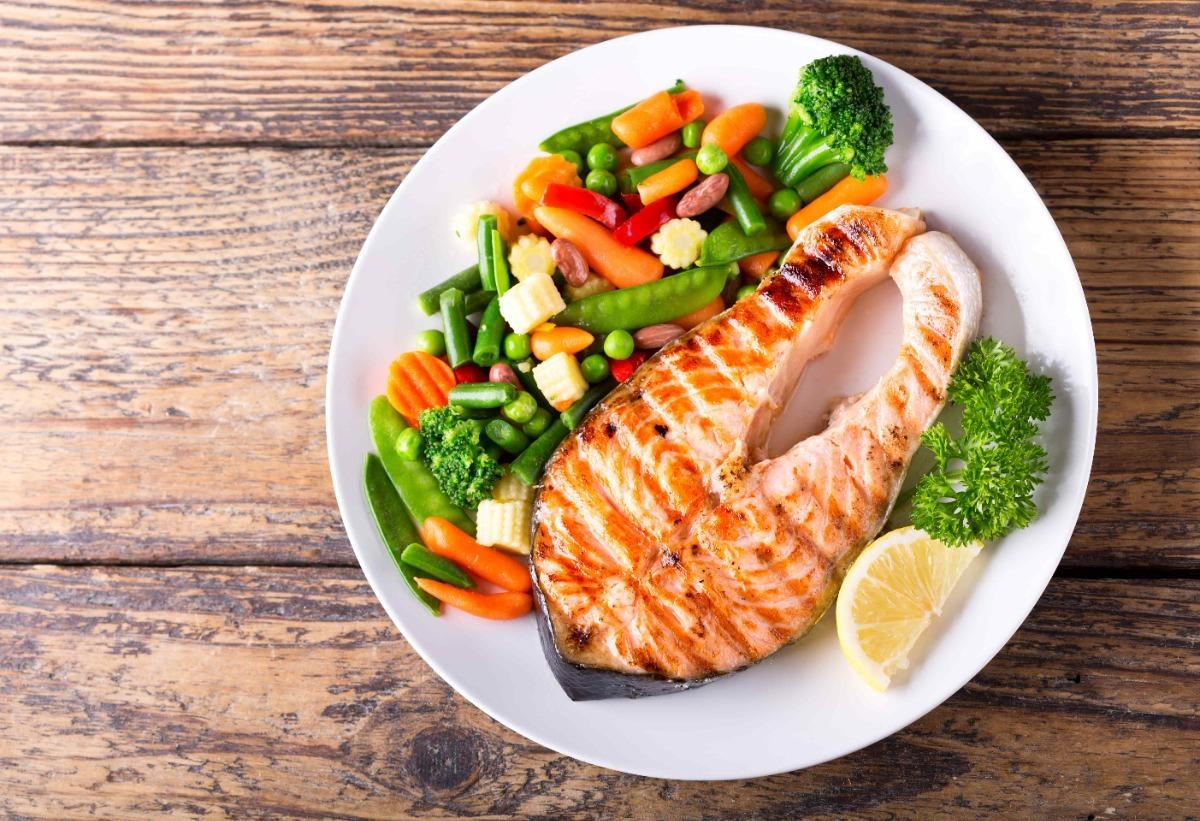 We have all been indoctrinated by the dogmatic deleterious health tenets of our past. In turn, this has made the idea of going against “the norm” seem both frightening and resistant – and as the saying goes, “in our comfort zone our safety lies.” It’s time, however, to step out of our comfort zone!

Staying within the comfort zone of “the norm” is a literal death sentence. It is as if we are walking alongside the footsteps of those who are living incarcerated by medications, surgery, and a decreased quality of life – simply because they are following the “norms” of our Standard American Diet. I suggest we break away from “norms” and follow the health avatars in preserving our health by adopting a whole foods plant-based diet. And for the purpose of this blog – we will be limiting our discussion on the detriments and myths surrounding the consumption of fish.

Eat more fish!
We have all heard it. For some time now, nutritionists have recommended that we eat fish on a regular basis in order to get sufficient amounts of a specialized fat called omega-3 (specifically DHA and EPA).  We have been told that these “fish” nutrients are good for the circulatory system as well as for boosting brain function, including both cognitive function and memory.

Even the American Heart Association recommends all adults eat oily fish at least twice weekly to reduce their cardiovascular disease risk. Could there be, however, associated health risks that both the AMA and other health authorities are overlooking?

A Little Science
There are basically 3 types of omega-3-fatty acids:
1.EPA or eicisapentaenoic acid
2.DHA or docosahexaenoic acid
3.ALA or alpha-linolenic acid

Of these three, the medical and nutritional world has established that only number 3 (ALA) is essential. This means that our body can make EPA and DHA from precursors of ingested ALA (the essential nutrient).  ALA is found abunda

ntly in the plant kingdom: flax, hemp, chia, walnuts, and green leafy veggies to name a few. Fish obtain their EPA and DHA from plants, specifically marine algae. Thus, all animals obtain their omega 3s from the original source – plants.

In addition, because fish oil supplements are produced from animals – they are susceptible to a form of rusting called oxidation. In turn, free radicals, compounds linked to destructive and cancer-forming processes in the body, are increased with the fish’s flesh and oils. Imagine leaving a piece of fish out on your table for weeks to months – what would happen? The oils and flesh are exposed to air (oxygen) and a negative chain reaction ensues – similar to fruit being left out and browning – and this is oxidation. Same is true for fish oil supplements – especially when exposed or kept under conditions related to high temperatures. They simply go BAD!

It is important to point out, however, for sake of completion and fairness that the conversion rates of ALA to the end products EPA and DHA are relatively low in the general population (but sufficient) and continue to decrease in persons suffering from acute and chronic illnesses (i.e. conversion rates are decreased in the presence of inflammation). With that said, however, we will not be discussing pathological-related dysfunctions in this blog post but rather the normal human physiological need for omega 3’s. With this foundation, of course, nutrient levels can be adapted and individualized to meet any additional needs a person may have.  Lastly, even though some individuals may require greater levels of EPA and DHA – they can, of course, obtain it from direct sources rather than rely on bodily conversion (i.e. algae and other seaweed).

Key Points:
You do not need fish or fish oil pills to obtain DHA and EPA. Plants provide both the primary and most beneficial sources as they come packaged with added nutrients that fish cannot provide.

A Sea of Toxins
It is important to note that the USDA has not set any organic standards for fish and seafood, so the current problems with contaminants in fish may very well still exist in any fish product that is called “organic.” Even the labeling, “ocean caught fish” can be deceiving as some companies are now simply just farming fish in pens that are found in the ocean.

Fish absorb contaminants as the water around them passes over their gills. Many of these chemicals do not break down in the environment, but dissolve easily in oils and can accumulate in the fatty tissues of the fish. Chemicals and metals in fish, such as polychlorinated biphenyls (PCBs) and mercury, have been linked to various ailments in the children of women who consumed fish contaminated with PCBs and mercury during pregnancy. These include low birth weight and negative effects on neurological and cognitive development. In addition, these chemicals and metals are linked to autoimmunity, heart disease, cancer, and more.

Two recent studies have shown that people with the higher amounts of mercury in their bodies, caused primarily by fish-eating, have more heart trouble.  The first one, published in the New England Journal of Medicine in 2002, found that higher levels of mercury in toenail clippings predicted a greater chance of future heart attacks. The next study looked at the mercury content of the hair and found, “High content of mercury in hair may be a risk factor for acute coronary events and CVD (coronary vascular disease), CHD (coronary heart disease), and all-cause mortality in middle-aged eastern Finnish men.”

So you ask – how abundant is this contamination?

According to the National Research Council, PCBs are found in EVERY locale around the globe where fish have been tested. Fish, therefore, are the most significant source of both PCBs and mercury for humans.

Also noteworthy are DDT and DDE, these two pesticides were banned three plus decades ago when they were found to be extremely toxic and, unfortunately, still reside in the environment. Studies have shown a direct relationship between consumption of fish and blood levels of PCBs, DDT, and DDE.

Lastly, the trophic effect of toxin accumulation increases as we eat higher up on the food chain. Thus, algae and plant derivatives will always have lower levels of toxins then the fish that consume them. And as larger fish eat smaller fish – they will, in turn, accumulate all of the toxins stored in the flesh and fat of the smaller sized fish.

Eskimos and Okinawans
Most of our heart-healthy information regarding fish consumption has come from 2 major sources:
-Eskimo studies
-Centenarians in Okinawa

But, the Eskimos – have protection from heat disease?
This is an easy one!

The real question is - why would we want to base dietary habits on groups of individuals (for example, the Asiatic Siberian Eskimos) whose life expectancy is roughly 45 years? Yes, they may have protection against certain cardiovascular-related diseases (found in the initial studies) but choosing to mimic your diet on a group of people with some of the lowest longevity rates on the planet is malpractice and deleterious to your health!

But, the Okinawans eat lots of fish and have increased longevity rates?
Recommendations to eat fish are based, in part, on laboratory research, but originated primarily from observations of various populations of people worldwide. For example, the rate of heart disease among fish-eating populations, such as the Japanese (Okinawans), is very low, and this has been falsely attributed to the so-called “good fats” they receive from eating fish.

Researchers overlooked the marked differences between overall Western and Japanese diets. The primary ingredient in the Japanese diet is PLANTS.  In fact, over 90% of all the foods the elder Okinawans ate were plant-based. The small amount of fish eaten weekly is, quite frankly, incidental (2-3 times a week). Time and time again, research scientists are practicing a form of reductionist bias.

Ask yourself:
Do you think the benefits of the diet were based on the fact they ate NO processed foods and a 90%+ whole food plant-based diet? Or, are the benefits from eating fish a few times a week?

We can see reductionist bias in many forms. For example, the Mediterranean diet becomes reduced to olive oil (despite the fact that the original research was performed by studying the predominately whole foods plant-based dietary habits of inhabitants on the island of Crete). The cuisine of the French becomes reduced to wine, and so forth. These reductionist tendencies to imply a dietary “elixir” is both marketable and profitable. Unfortunately, the bird’s eye view is often missed – simply because commitment to dietary and lifestyle habits are less sexy.

Key Point:
Listen to commonsense and rules of reasonableness when interpreting data – especially Eskimo and Okinawan studies which have become the cornerstone of the fish-omega-3 hype.

Final Thoughts
The basic premise of dietary excellence is to eat more of the healthier foods and to demonize those foods that have the largest correlations with disease states. Fortunately, the research is crystal clear – eating more whole plant-based foods demonstrates a direct linear relationship with optimal health and contributes significantly to decreases in degenerative diseases such as diabetes, cancer, heart disease, etc. In comparison, eating less whole plant-based foods demonstrates a direct correlation with ill health and increased degenerative diseases.

In conclusion, I believe the most important aspect of this debate resides in science correlations with QUANTITY rather than the QUALITY of animal-based foods consumption such as: chicken, eggs, fish, turkey, organic, non-organic, free-ranged, pasture-raised, and the like. In other words, we have been focusing on trading one type of animal product for another:

In doing so the magic of longevity and aging will continue to elude us and remain hidden from under our very own eyes. The goal is not to change the quality of your animal-based food choices (chicken, eggs, fish, organic, free-ranged, etc.) but rather the QUANTITY.

The science again is crystal clear – all animal protein (undifferentiated in type or quality) is what has been found to be correlated with increasing cancer and heart disease rates. For example, some of the original experiments predating the China Study (which is one of the largest and longest epidemiological studies on nutrition/disease correlations) demonstrated that increasing the percentage of animal protein past 10% of the diet impacts health by tumor and cancer formation.  Thus, it is quantity not type that matters!